Based on the Sotho (aka Basotho) people, who live in the country of Lesotho and South Africa.

The most characteristic piece on their costumes is the Basotho blanket, which was customized for the film with metallic foil printed designs, mostly Adinkra symbols and Modern Wakandan. Interestingly, the metallic foil is supposed to be vibranium, which gives the blankets special protective powers. 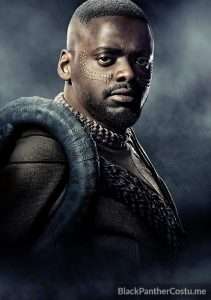 In a few scenes in Black Panther, W’Kabi wears two blankets. His unique blue blanket is on the outside, with another blanket (one sporting a houndstooth pattern) underneath. It’s hard to make out anything much more than his necklace and kimoyo beads in these scenes. 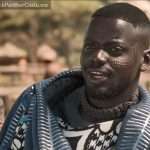 W’Kabi has arches of scarification marks on his cheeks. 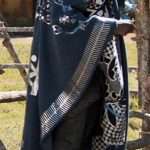 Note the ribbed texture on his tan/brown pants. 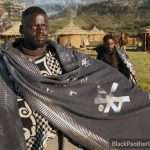 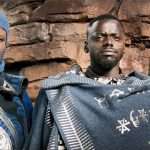 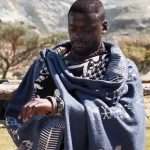 During meetings at the palace, W’Kabi wears one blanket (usually hanging from his shoulder harness). It’s much easier to see the parts of his costume during these scenes.

A large leather-wrapped hoop goes around the shoulder and underarm. Another smaller leather-wrapped hoop goes over the deltoid and is filled in with knitted leather, with as 5 vertical strips on the surface. The deltoid pad is held on with leather lace (thin strips of leather). The assembly is held onto the body by a large band made up of 2 layers: a band of knit leather, with a wider band of silver metallic-finish leather hide underneath.

W’Kabi wears a unique sweatshirt/sweater. It is tan or light brown and appears to be made of twill-weave fleece or French terry (and has a pilled, worn appearance). The sleeves are raglan-cut (no shoulder seams). The body has several vertical seams. The front is made up of 5 pieces, with blue panels making up the far sides.

A necklace made of brown cord and parachute cord, using a macrame technique.

Tan-colored, knit arm warmers that go up the the mid upper arm. The ends have separate holes for the thumb and fingers. The outside has a ribbed texture.

Knitted leather with a brown border.

Brown belts with whip-stitching along the edges. Rectangular nickle buckles. In one shot, you can see W’Kabi’s sword wedged in under the belts.

In the palace, he is wearing tan/brown pants.

He wears some kind of brown suede leather wrap around his waist. Adinkra symbols decorate the borders.

Note his sword is being kept under the belts. 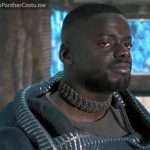 Pants are tan/brown but appear to have dark panels on the back.

W’Kabi’s outfit here seems very similar. However, he appears to be wearing black pants (they look like black, ribbed-knee joggers) and he has a horn attached to his side. No arm warmers.

Pants appear to be black in this scene.

Here you can see how the blanket is stowed for battle.

A lark’s head knot hold his horn sheath to the harness. 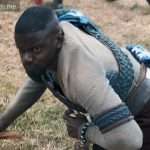 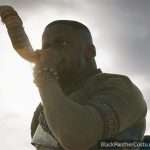 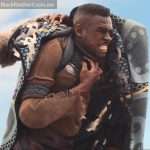