Nakia. A War Dog from the River Tribe. Love interest of T’Challa.

“Nakia has a range of disguises throughout “Black Panther” that make her particularly fascinating. “We see her in Nigeria in the beginning with ripped jeans; we see her at the Warrior Falls and she wears her River tribe costume; we see her in the CIA with leather pants and jean jacket; we see her in a casino and she portrays an African princess in a long gown. We covered the layers of women with their toughness and softness at the same time,” said Carter.
indiewire

River stone necklace to signify her tribe.
Head cover is called a khimar. Under the khimar is a scarf tied around her head. 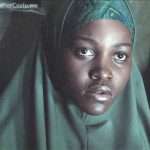 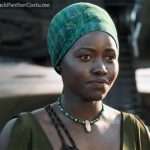 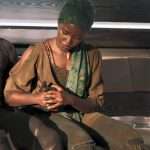 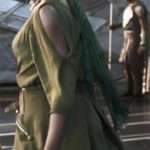 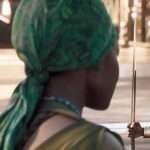 Costume inspired by the Suri people (river people of Ethiopia). 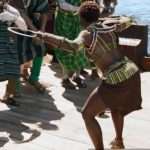 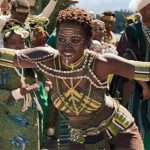 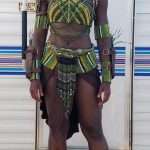 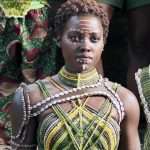 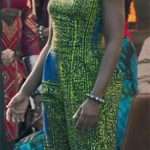 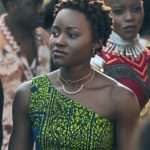 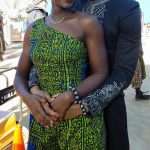 “But she also has a high-wattage fight scene in a casino in South Korea, for which she wears a striking green, high-neck, open-shoulder dress. Ms. Carter and her team designed the fabric and had it 3-D-printed. They started with a kente cloth, “extracted the line work and created a pattern, hand-painted it,” she said. It’s covered with Wakandan text — boxes with slashes inside — and it’s sexy but not revealing. “It was her Bond Girl moment,” Ms. Carter said, “but also, she could fight and move in it, and it wasn’t constricting.” NYTimes 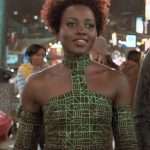 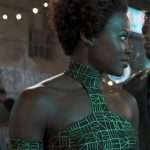 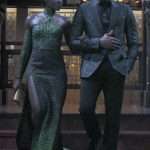 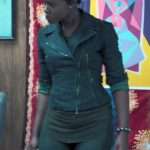 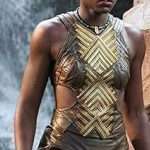 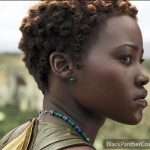 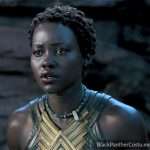 Escape to the Mountains 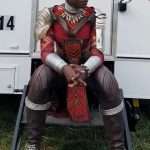 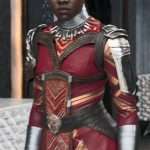 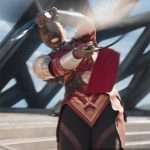 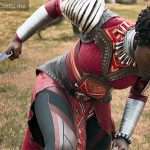 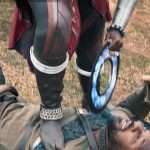 End Scene at the Step Down District 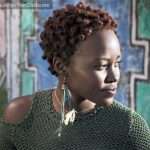 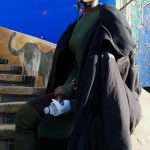 “We know that Lupita Nyong’o can wear just about anything and make it look stunning, but for the scene where her character Nakia gets dressed up for an undercover mission at a South Korean casino, Carter had to get specific. “It seems as though it would be a sky-is-the-limit thing, but it really isn’t because this is a superhero film and she is a superhero,” said Carter. “There were parameters: She’s entering the casino undercover as an African princess. She has to wear green, because she is a part of the River Tribe. She needs to look elegant, and therefore needs to wear an elegant dress. She also needs to be able to fight, so she needs to have a dress that will allow her to move and to fight.”

Carter settled on a beautiful green-ombre garment with a pattern taken from African trends and printed with raised ink. “So this is an original pattern-and-line work that’s laid and printed on a stretch fabric,” she said. “It’s the same process that we use to print the fabric for the Black Panther suit, and it’s to give her stretch and enough flexibility so that she could fight.” In fact, almost everything that makes the dress so memorable is also meant to gird Nakia for battle. “The armbands kind of inform that she is protecting herself,” said Carter. “And you can imagine that because the dress is from Wakanda, it might have Vibranium laced in it, so we did a metallic paint so that in a certain light really does kind of illuminate. This dress was actually a warrior dress, but it’s in disguise.” – Vulture

NAKIA: THE HIJAB AND HER TRADITIONAL DRESS
“Nakia is a war dog. She’s an operative; a spy, so she has the most looks of everyone in the film. She goes undercover as a Nigerian captive in the hijab, but then I had to quickly get her out of the hijab and give her a costume that looked like she could’ve been hanging out in any city in Africa. She had to look like she could walk down any street and blend in. When we see Nakia at the airstrip, we see her in jeans and a flowy top and a scarf. Then we see her at Warrior Falls in her traditional costume for the traditional ceremony as the River Tribe’s primary fighter. Then we see her in her casino dress. She has a lot of different costumes.

“There are lots of history books with photos of Surma children who have flowers and sticks that they adorn their bodies with. That was the main inspiration behind Nakia’s traditional costume—but we also needed it to look like she was a warrior, so we gave a cross-body harness to go over the top.”
-themarysue

“NAKIA: THE CASINO DRESS
“Nakia’s casino dress was based on a Kente pattern. When we see her in this dress, it’s very ‘Bond Girl’.

“We used the simple line-work from the Kente pattern and we had it printed on the same type of eurojersey that we used for the Panther suit. Once we had an all-black dress printed, we hand-painted it so that it would have an ombré effect.

“The ombré green paint has a little fleck of metallic in it, so when you see Nakia walk through the casino, the dress illuminates in different areas. She also needed two very long slits in the dress so that she could fight.”
-themarysue