The dreadlock-style headdress the Mining Tribe Elder wears is from the Himba people of Namibia. It’s called an erembe and it’s a wig that is made with red ochre and shea butter (the blend is called otjize). Red ochre stones are ground up and mixed with butter, and then warmed up before being applied to the locks. The locks are often made of goat hair or Indian hair extensions, the base of the headdress out of cow or goat leather.

The Mining Tribe Elder also wears a beaded crown that was inspired by costume designer Ruth Carter’s work on the 2016 Roots remake.

The Mining tribe warrior is wearing a Maassai headdress, beadwork done by Carter, and a simple drape tied at shoulders.

Miners wear an orange/red combo, similar to the Turkana tribe. 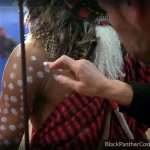 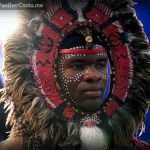 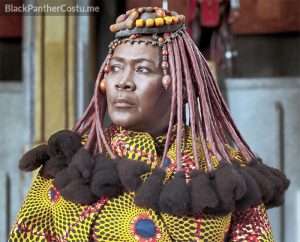 The Mining Tribe Elder wears a gown made of Malian mudcloth. 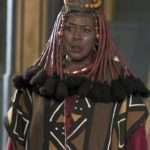 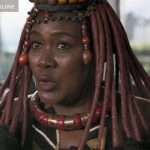 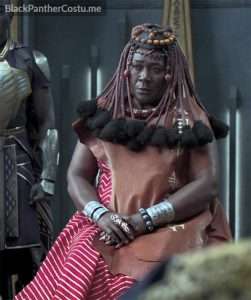